Cheepie isn’t an early adopter. I had an iPhone until last year. Just an iPhone, no number after it. Because it was the first one. It had two fingerprint sized balloons of dead pixels, a quarter of the screen was packing tape covered cracks and the  app store just laughed if I tried to connect.  It still sent texts so I kept using it, despite the fact that it could only hold a charge for 20 minutes. 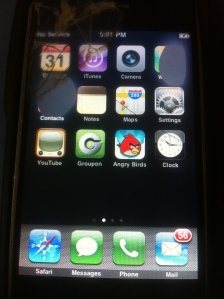 Eventually a friend took pity on me, or tired of me always needing to sit near an outlet when we went out, and updated me from her ‘junk’ drawer.  I’m friends with some generous people! So with my fancy ‘new’ phone I’ve been able to tell you about on-the-spot deals I find, and tweet about how pumpkins can be worrisome.

When HEB/Instacart made their announcement a bit ago about a partnership, marriage, or conscious coupling, I realized something important. I blog about Grocery Shopping. Covering advances in this area is clearly content my readers would have some interest in. I realize this doesn’t make me an early Instacart adopter, but short of this I’d have likely waited until some thoughtful person took my license away because I was 95 and blind. For me, this is early.

I ordered milk, bread, and eight other things just before 1pm. My first delivery window was 5-6pm, which was fine since I’d let the kids finish off a half-gallon of Bluebell and they were set for a while.

I hate gum! Surely I didn’t buy that? Kids are sneaky.

My impression of the whole ordering experience was that it was simple. Simple to find what I wanted, simple to register, simple to pick HEB, all super easy. And don’t forget, the first order? Free delivery.

Then, ten minutes early, a friendly guy showed up with four bags of groceries. I handed him a cash tip, because I’m old and that’s how I tip.  I asked him how he liked delivering for Instacart.  He said that he was enjoying it, and that he was just a driver. The shoppers stationed in the store bring the orders out to him.  Reading more about the ‘partnership’ it seems HEB has had Instacart for a while now, and the new thing is this stationing of shoppers that are in the store.

The grapes were perfect, everything arrived, with no missing items. I wasn’t even charged for the HEB bags, an aspect of this system that I didn’t think of until I was unloading my order. Your shopper doesn’t come and pick up your reusable bags, after all.

Yes, while shopping I did check on pricing, because that’s what I do. I was also shopping from my desk while hungry, which explains the chips, salsa and queso. In my defense I did buy the snack I felt had the most minimal markup. Overall, the pricing seemed varied. Some items were $1 over what I’d expect on the shelf, others only 10c or so.  If you’re a price-conscious shopper, you’d need a serious price book or photographic memory to be sure you weren’t over your price point for an item.

I know what you’re thinking. ‘Cheepie! As a Grocery Maven, I rely on your help to tell me where to shop. What do I do now?’

Answer: I think Instacart is worth checking out.  We all have overwhelming weeks where adding one more trip to the list is pushing our sanity to the limit. Sometime, when you’re not in dire straits, head over and just look at the pricing and see if what you normally might order (bread, milk, tp, Bota Boxes)(no? just me? moving on) has got a markup that hits your own price point limit.

The site is easy to use, the emails I received about my order were accurate and timely, delivery was polite. I don’t have a single bad thing to say about my experience.

Delivering the first order for free is smart, as always, because now I know it’s there. I likely wouldn’t have done this if they were charging me the delivery fee–I wanted to see how it worked first.

For me, living in the middle of five different grocery stores, I need a good reason to pay the markup, fee and tip. I can see people getting addicted easily, though, especially parents that have little ones to strap in/argue with/placate/change/feed/mentally abandon to get through a big shopping trip.

For my particular order, the milk is the only thing I found well over what I’d pay in the store. I pay $2.78/gal for Randalls Pantry Essentials, so it was a big jump.  Because everything else was pretty much in line, I felt okay about it. With the free first-time shopper bonus, I really felt like I’d made a purchase that would help Cheepsters.

Or keep me from having to find real pants. One of those.

One thought on “Instacart HEB Review”