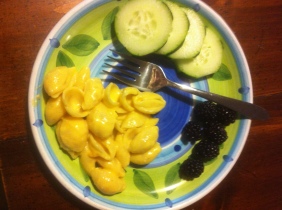 light is odd, it was NOT that orangey!

I’m not even putting the scores up there. It’s nearly six months into the Internet Accountability Project. You know what the score here is–two good days, one half-assed day and two days completely off the rails.  That’s an 8 point week, and we all know it.

I did start amazingly well.  That’s what happens when your neighbor shows up with a huge sack of escarole.  You have to eat things your neighbors give you. It’s a rule.  DH has a rule that if a toddler offers him food he has to eat it, in order to reinforce the idea that sharing and being thoughtful of others is a good thing (also that food is good. the man is a fan of food).  I have a rule that if a neighbor shows up with something they grew, it’s getting eaten.

Unless it’s that weird death fruit. I’m not eating that. Even Andrew Zimmern spit out durian, and he is the grown-up globetrotting Mikey of the Food Channel.  He’ll eat anything.

Truth be told, I was the only one that ate the beans/escarole/sausage for dinner on Monday. Everyone else opted for a sandwich. But they gave it a try first, and that’s fine with me. 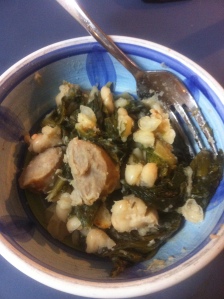 this was really good

I think the end of the week derailed due to a combination of me making a plan that I knew might not be received well (the baked deviled eggs thing is something only I like, for some mysterious reason) and us hitting another stretch of weeks that have a lot of socializing/sports/activities.  Opening my fridge right now would show a lot of takeout containers and leftover Chinese food.  But we all got to see friends and get our activities done, so that’s the upside.

Also a fun point? WordPress doesn’t think ‘escarole’ is a thing, so it keeps trying to suggest other things.  Mostly ‘estragole’ which looks like this:

and not really like the leafy stuff in the bowl over there. Though it is in some leafy things. Looking at you bay and tarragon!

See you tomorrow for the meal plan! Cheep Cheep!